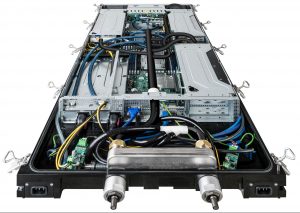 Liquid Cooling includes both direct to chip and immersion cooling and is trending with data centers of all sizes as rack density increases to the point that air cooling is no longer cost effective. Big Data, AI and Edge Computing all demand lots of computing power, which generates more heat. With increased power density comes a need for more efficient and effective cooling. If your data center keeps chasing better cooling total cost of ownership (TCO) through changing rack layouts, floor tile fan placement, perimeter and other air cooling set-ups, it might be time to consider the higher buy-in, but lower TCO of liquid cooling.

In immersion cooling applications the liquid coolant is in direct contact with the IT electronic components. All fans within the server can be removed and all electronics are placed in the liquid. The liquid is slow to react to external changes in temperature, shielding the components from the influence of humidity and pollutants, and it gives the system the ability to operate, without fans in near silence.

Direct to chip cooling features coolant directed to the hotter components using a cold plate on a chip within the server. The electronic components of the IT are not in direct contact with the liquid coolant and fans are still required to provide airflow.

Direct to chip cooling is ideal for retrofits with existing air-cooled systems.  With relatively minor changes, and the addition of cold plates and tubing, a rackmount system can be converted to liquid to the chip cooling. A dielectric fluid wouldn’t cause much damage if it leaks and facilities can retrofit one rack at a time.  There would be a learning curve as staff figures out how to maintain the new system.

Implementing immersion cooling is a bigger upfront cost but allows the system to operate in grey space or harsh environments. And because it is quiet, it is a great option for areas where a noisy cooling system would not be welcome.

At some point, the benefits of liquid cooling, such as low water usage, higher efficiency, reduced noise, and ability to be used almost anywhere, may be worth the higher buy-in cost of retrofitting with direct to chip or an immersion cooling system. 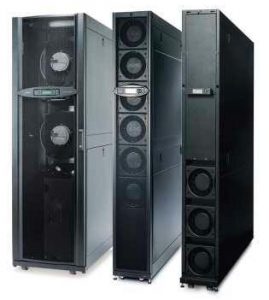 Adding liquid cooling for retrofits may currently be cost prohibitive for some facilities. In those cases, hot aisle/cold aisle layout design for servers can conserve energy and lower cooling costs by better managing air flow.

A hot aisle/cold cooling format involves lining up server racks in alternating rows, with cold air intakes facing one way and hot air exhausts facing the other. Hot aisle/cold aisle arrangements lower cooling costs by better managing airflow, requiring lower fan speeds and increasing the use of air-side or water-side economizers. Row cooling can replace a mix of cooling systems, such as perimeter and row when used in the proper layout. Once the ideal rack cooling layout has been determined, ideally through modeling software, perimeter cooling can be removed and more racks can be added to the same existing floor space, all while improving the efficiency of the data center. When thermal containment is added, overall cooling efficiency is increased, and costs drop.

Thermal Containment for hot/cold aisles is essentially what it sounds like; doors and a ceiling are added to aisles to contain the air within that aisle and prevent it from mixing with air of a different temperature. If those different temperature air masses mix, the cooling system must work harder to maintain the proper temperature for the equipment. 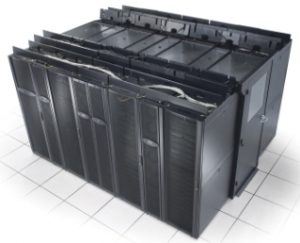 The APC InRow Cooling line provides for hot-aisle/cold-aisle cooling layout with either an open architecture or with containment. With more control over air distribution through a shorter path between the hot air and the heat removal, this cooling method is efficient and predictable and can easily be implemented into existing data centers. The APC by Schneider Electric Uniflair Chilled Water InRow and the Uniflair Direct Expansion InRow cooling systems use intelligent controls to meet the load and improve predictability and efficiency.

The APC Chilled Water InRow system closely couples the cooling with the heat source while intelligent controls actively adjust to match the load. Available in various configurations, these units are ideal for meeting the diverse requirements of medium to large data center.

The APC Direct Expansion InRow system uses air, water, and glycol for cooling network closets, server rooms, and data centers. The InRow Direct Expansion family closely couples the cooling with the heat source and is available in air-cooled, self-contained and fluid cooled configurations. IT operators looking to improve efficiency or deploy higher density equipment will benefit from the modular design.

Benefits of Hot-Aisle/Cold-Aisle Layout for Cooling