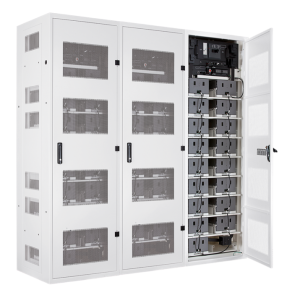 The lower costs and enhanced safety features make Lithium-Ion batteries a practical choice for some large enterprise 3-Phase UPS applications, especially when considering the total cost of ownership of a UPS system.

Longer life expectancy – In theory, VRLA batteries used in UPS systems have a life expectancy of about 7 years. But, with real world conditions, most customers need to replace them after only 3-5 years. Lithium-ion batteries have a 15 year design life. Lithium-ion technology can double or triple battery service life, reducing the risks of downtime or load interruption during maintenance or replacement. Lithium-Ion batteries also offer up to 10X the cycle life of VRLA batteries.

More power in less space – Lithium-ion batteries provide multiple times the energy and power density compared to VRLA. As a result, UPSs built with Li-ion batteries take up only about one-third the space of a VRLA-based solution that delivers the same power. In general, a lithium-ion battery system for a UPS will take up 50-80% less floor space and weigh 60-80% less than a comparable lead-acid battery system.

Reduced cooling requirements and costs – The smaller footprint and wider temp range of lithium ion batteries can reduce the space needed in a battery room and increase the optimal operating temperature range. This is good for the health of your other IT equipment, which functions better at more moderate temperatures than VRLA batteries prefer. And Li-ion battery’s ability to maintain a longer life at higher temps allows you to save on cooling costs.

Less weight – Lithium-ion batteries offer at least a two-thirds reduction in weight. That means customers have more flexibility in terms of where they install the systems and can often avoid costly building modifications.

Too Expensive – While, the initial cost for Li-ion batteries can be about two to three times more for the same amount of energy, Li-Ion batteries come with a battery management system and have a longer lifespan.  The initial increased cost is offset by the need for fewer battery replacements over time, leaving Li-Ion batteries with a lower total cost of ownership than their VRLA counterparts.

Strict Transportation Regulations  – Various regulations exist regarding shipping and handling for any kind of battery including Li-ion or VRLA. These shipping regulations tend to be stricter with Li-ion chemistries because of the higher energy densities, but any special handling charges are often offset by the lighter shipping weight of the battery compared to VRLA.

Risk of Thermal Runaway  – Li-ion batteries have several layers of safety features, such as integrated battery monitoring, built into each battery cell to prevent overheating.  Each battery cell within the battery module is designed to shut down in the unlikely event that high temperature thresholds are reached.  The battery management system allows the rest of the string to stay online while isolating the bad cell.  In addition, advances in battery chemistries have made carbon-less options available that virtually eliminate any risk of thermal runaway.

Lithium-ion batteries offer many benefits as the backup power for your large, three-phase UPS system. Most manufacturers now offer Li-Ion battery options, with more sizes and ranges coming on the market every month,  and all are worth considering when choosing a new UPS system. In some cases these models can also be retrofitted to use Li-ion batteries.

For more information about Lithium-Ion Batteries and the UPS systems that can utilize them,
call 800-876-9373 or email sales@power-solutions.com.

What is the life expectancy of Lithium-Ion Batteries?
A: Lithium-ion batteries have a 15 year design life which is double or triple the battery service life of VRLA. Fewer battery replacements reduce the risk of downtime or load interruption during maintenance. Lithium-Ion batteries also offer up to 10X the cycle life of VRLA batteries and come with cell-level battery monitoring systems that provide a clear picture of battery runtime and health.

Why is the smaller size of Li-ion Batteries important?
A: Lithium-ion batteries provide multiple times the energy and power density compared to VRLA and only take up only about one-third the space. In general, a lithium-ion battery system for a UPS will take up 50-80% less floor space and weigh 60-80% less than a comparable lead-acid system. The smaller footprint and wider temp range of lithium ion batteries can reduce the space needed in a battery room and increase the optimal operating temperature range allowing you to save on cooling costs by keeping the temp a bit higher and cooling a smaller area.

How does the recharge time compare to lead acid batteries?
A: In most cases, the time to reach an 80% state of charge is the same for both VRLA and Li-ion. The lithium battery has a slightly better charge efficiency, so it will reach that level slightly sooner. But to go from 80% to 100% state of charge, the lithium-ion battery is far better. A li-ion battery will reach a 100% SOC in 30 minutes to an hour.

What type of maintenance is required?
A: Lithium-ion batteries have very low maintenance requirements. Their long life span of 10 or more years reduces the need to have to replace them over the course of the UPS’s period of use. By the time the batteries need replaced, it is likely time to replace the UPS as well. The included battery management system automatically collects and reports all the required data to accurately understand the battery system’s health and status which further reduces maintenance burdens.

Are they recyclable?
A: Yes, they are recyclable. And there are many recyclers who will take smaller lithium-ion batteries. Some do end up shredded and in a landfill. Research is on-going to improve the recycling economics and governments are beginning to encourage, incent, or outright require the collection and proper recycling of the batteries.

Are lithium-ion batteries a safety hazard?
A: All battery types, if mishandled (e.g., thrown in a fire) or overcharged have the potential for being a hazard by releasing hazardous materials or igniting a fire. Lithium-ion batteries have been thought to be more volatile due to reported cases of fire and due to their much higher specific energy combined with a greater sensitivity to being over charged. Today’s Lithium-ion battery options have safety features that make it nearly impossible for the battery to approach thermal runaway.

Lithium-ion batteries offer many benefits as the backup power for your three-phase UPS system. In some cases these models can be retrofitted to use Li-ion batteries.

For more information about Lithium-Ion Batteries and the UPS Systems that utilize them,
call 800-876-9373 or email sales@power-solutions.com.